The middle school English teacher battling student apathy, school bureaucracy, the standardized testing/education reform movement, and gum, yet still manages to enjoy teaching. His obsessions include reading, Star Wars, acting and directing in plays, attempting to complete the first sentence of his novel, attempting to finish "Moby Dick" before his 90th birthday and dealing with the fact that his own middle school-aged twins., Tom and Jen are now in his class.

The woman behind the teacher, Mrs. Fitz has always been Mr. Fitz's sounding board, but she is now his colleague as well. Mrs. Fitz teaches the college prep elective, SUCCESS, upstairs from Mr. Fitz. She also performs in plays, and is mom to their twins, Tom and Jen, (whom she refused to name Luke and Leia).

The queen of labs, projects, and hands-on activities, the team science teacher boldly goes where no class has gone before. She sympathizes with her students—sometimes a bit too much.

Mrs. Merritt is the education reform movement’s ideal teacher. Driven by the hope of a bonus for high test scores, she implements all directives with fidelity, is never without her Data Notebook, and doesn’t consider herself a teacher. She is a QLGF: a Quantitative Learning Gains Facilitator!

She has been teaching at Bulwer-Lytton Middle School for a long, long time. Possibly before they even broke ground. She is the queen of educational technology—if it’s several decades out of date. Visit her room to see film strips, movie projectors, blackboards, and record players. Stay to smell the ditto machine. Despite being a bit behind in tech department, Mrs. Methuselah has seen it all—and has a lot of wisdom to offer.

Mr. Pardee’s class is a place of never-ending fun, candy, and prizes! Play games! Sing songs! Get bribed! Get easy grades! Many kids love Mr. Pardee. Many of his fellow teachers, not so much.

Ex-military (no one is sure which branch) teacher who runs his class like basic training.

The school art teacher wants to encourage true creativity among students who like tracing Pokemon images.

The master of the multi-page educational experience (the packet), this social studies teacher teaches about dictatorships by running her classroom as one.

Always perky, upbeat, and chipper, no matter what may be going on around her, the district superintendent's squinty eyes and cemented smile are her trademark.

A former-marine, Mr. Stricter is the muscle on campus. With a voice that sounds like basic training incarnate, he can make students (and most teachers) quake in their boots. Yet underneath the strict exterior is a wicked sense of humor and a big heart. 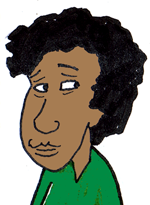 The new principal of Bulwer-Lytton K-12 school is just what Mr. Fitz needed - principal who defends creative teaching and whose motto is, "Do what's best for kids!" (Based on an actual character!)

Jen is the younger of the Fitz twins-- an artistic genius with an eccentric bent.

The Fitz’s son solves Rubik’s cubes in under a minute and reads physics books for fun.

Candy Sweet is a poet, and Gail Goth’s arch enemy. She writes poems about puppies, kitties, and rainbows. Candy always looks on the bright side of life.

Clive is a great student and avid who tries to look at life logically, but has a deep love of the fantastical.

Delilah is new to Bulwer Lytton Middle School. She loves a class to be fun! She breathes fun! She is fun!

A repeater of several grades, Dirth’s philosophy is “less is less.” But don’t ask him to put that, or anything else, in writing.

Fionna compensates for her unhappy home life by bringing order to chaos wherever she goes. She is the organizational expert who keeps Mr. Fitz’s desk in order.

Gail is a poet who dresses all in black and writes poems like “The Bleeding Entrails of Eternity.” She is the arch-nemesis of fellow-poet Candy Sweet.

Born in a Starbucks, Grande is tall for a sixth grader. He’s tall for any grade or age, for that matter. Grande has handwriting issues, and struggles with self-doubt, but he’s smarter than he thinks he is.

You seldom see one without the other. These two fan-boys emulate their heroes, Siskel and Ebert, by reviewing classes for their entertainment value.

Graciella's current claim to fame is rating teachers on her non-scientific "coolness scale". She's actually a very bright student, but don't tell anyone-- she thinks it would lower her on the "coolness" scale.

At the age of 11, she has already won beauty pageants and been featured in Teen Vogue. She is frequently absent to attend photo shoots. Life is truly her runway.

Roy is renowned for his positive attitude, big smile, and big stature. He has been known to go to the drinking fountain and return an inch or so taller.

Skateboard dude, and protégé of the great anti-reading strategist, Spike, Rusty is carrying on Spike's tradition of working harder at avoiding books than most people do at actually reading.

Jeremy exercises school-choice by withdrawing and reentering middle school several times a year. He has tried nearly every alternative there is to public schools, but always returns to Bulwer Lytton Middle School, where he is perpetually behind.

The student who sometimes get lost in the shuffle, Jill’s pigtails sometimes seem to be her distinguishing feature.

LOVES English class! She loves reading and writing and spelling and vocabulary and even grammar exercises! Her enthusiasm can be overwhelming, but unfortunately it isn't catching.

New to the middle school, Ken is open to new experiences. Especially if they are tactile or involve eating something weird.

Lakeeshia is a good student who hopes to be a lawyer someday—but hasn’t quite figured out that this involves getting great grades.

Lily is the perfect student… a little too perfect. She has never had less than an “A”… on anything, she is completely obsessed with school-work, studies for the SAT every night, and has already picked out her college and grad school.

Recently displaced from her home-country by people who don’t think girls should be educated, Mara has a deep disdain for students who don’t appreciate their free education.

Miguel is an ESOL student who is a quick study. He not only learned English as a second language, he picked up some French and Russian as well.

Molly is a very accomplished student with a slightly skewed perspective on life. She devours books of all kinds, including her mom’s romance novels and other tomes of questionable content. She is a free-range reader.

A Science geek, as well as a Sci-Fi geek, Morton is even more up on what’s happening in the Star Wars and Star Trek universes than Mr. Fitz. 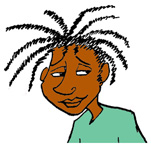 Rashad is not a bad kid, and his parents want to keep it that way. Thus, a constant flow of contact with his teachers via phone, email, cell phone, fax, pager, and possibly smoke signals if necessary.

Spike is a “reluctant reader” who secretly likes reading but tries to hide it—because reading isn’t cool. Or learning. Or school and general. Yet he learns anyway.

True to his name, Ted is never on time—and has an endless array of reasons to justify being late.

Tessy tries to express her individualism by copying all the fashions in the trendiest teen magazines (periodicals with titles like "Trendy Teen"). Tessy would like to be a model someday, and practices every day in class.

The Fitz family pet, Bob didn't lose his tail in an accident: he's a Manx, a breed of tail-less cats that originated on the Isle of Mann. Bob was supposed to be a house cat, but chose to be an alley cat, probably because he might be part bob-cat. 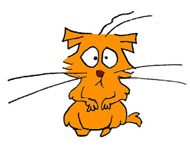 Smudgly is the Bulwer-Lytton Middle School mascot, a tame lemming. Smudgly was found in the wild by Ms. Kepler on one of her science expeditions. He wanted to hurl himself to his demise with the other lemmings, but was afraid of heights. He is the only hold-over from my Stetson University strip, "The Forest of Arden".